My walking practice aims to challenge the ‘natural’ landscape as mother. I get a bit fed up with biological determinism in our understandings of motherhood. I don’t think it does anybody any favours. It’s not ‘natural’ that women are selfless and benevolent backgrounds to their children, or carry more than their fair share of the load of child-rearing, it’s cultural. We can separate biology from behaviour, but we are encouraged to think they are one and the same.

With all this in mind, I have chosen an example of another mother who queries notions of the natural, albeit in a very different way to my own.

Jess Dobkin The Lactation Station (2006-12) uses technology to interrogate what we may consider the original ‘natural’ experience, that of tasting breastmilk. By pasteurising the breastmilk of six volunteer lactating mothers, Dobkin uses technology to interrogate the ‘natural’, the taboo, and the abject simultaneously in one act; that of inviting adults to taste breastmilk. Whether they choose to accept the invitation is up to them. 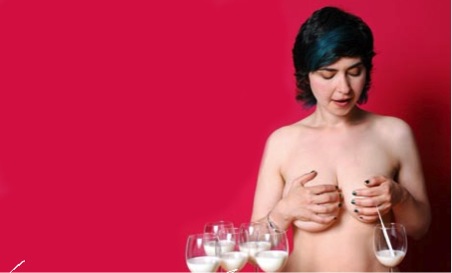 To further complicate notions of natural, Dobkin herself struggled to breastfeed. Feeding a baby in public is a superlative performative act, which brings judgement whatever choices we make. Dobkin states “where I would have been quite shameless about breastfeeding in public, I felt apologetic nursing with a bottle in the open” (2006).

The Lactation Station opens the personal and sometimes fraught decisions surrounding experiences of breastmilk to others. Refreshingly (pardon the pun), it is not only the mother, but everybody involved in the shared space of the performance who performs, who is watched, who makes choices with which others may disagree. In framing the bodily function as an act separate from the maternal, Dobkin brings new attention to the politics of the natural and the technological, and how cultural and temporal they are.

My current work explores walking practices as a way to articulate the maternal experience. GPS Embroidery is an ongoing project, funded by the Arts Council. Other performance, exhibition and publication contexts include DIEP’s Performing Parenthood festival (2017), LADA’s Study Room Guide to the Maternal (2016), Walking Women at Somerset House (2016), International Motherhood and Creativity conference at London Southbank University (2015), The Walking Encyclopedia (2014) and Ways to Wander (2015). I developed the performance documentation The Pilgrimage of the Prodigal Daughter (2013) as part of Bristol Old Vic’s Ferment.  My practice- based PhD research at Exeter University considers walking documentation and its potential to re-frame the maternal beyond the suburban and the sentimental.